So, not sure what’s going on, but it doesn’t appear that any of my replies to comments are making it to publication.  WB, you asked about Geena’s sire.  He is a JB Roar X Cabin Fever Miss Millie son, Morgan Rivers Expresso, Ethan.
Posted by Morgan River.blogspot.com at 8:46 PM 1 comment: 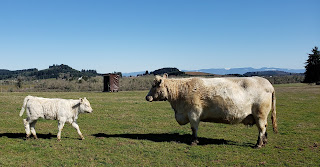 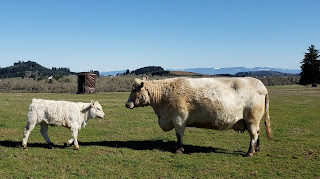 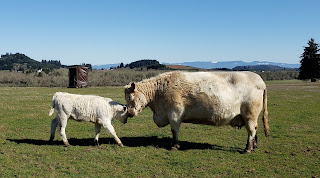 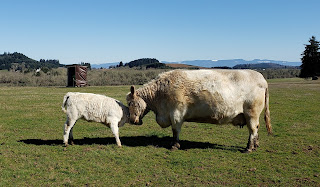 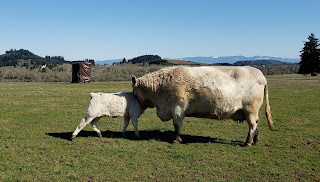 Goodbye to a Good Old Dog

I was there the day he was born.  The litter was only a few hours old when I arrived with Ho Dog for a training session with Tom.  I looked at Sin lying there with a pile of pups, and I saw him. I took one look and said ‘I love that one’.  Tom was keeping him, but every time we were there for training, I’d go visit. And, it appeared that Touch (his name then) loved me too, because the other pups would carry on with puppy shenanigans, and he would be at the side of the pen, wiggling and licking my hand.

It took 4 months for Tom to finally turn him loose.  And, I brought home the ugliest red merle Aussie pup that possibly ever existed.  Dale was horrified. “Oh god, please tell me he’ll grow into that nose and those ears” was all he could say.

Ho Dog was over the moon.  I’d brought him a play toy that could keep up with him.  For years, until the girl thing happened, they were inseparable.  And even after the girl thing, when they weren’t locked in mortal combat over a bitch in heat, they were best buds.

I remember the first time Dale trialed him in Arizona.  Due to the Newcastle outbreak, Hoke had never, ever been in even the same zip code as a duck.  I entered him anyway. Dale walked up to Marti Parrish, the judge, and asked “how much per duck?”.  She didn’t know what he meant for a moment, but we were both pretty sure it was going to be feathers and fur flying.

He placed second, behind a nationally ranked, Open level Border Collie.  He was always good on ducks.

Sheep and cattle, however, saw him channel his inner Richard Petty (a famous race car driver).  We tried everything to slow him down. Not much success, but he was usually appropriate on sheep, even if he did have nearly sub 1 minute Started runs.

On cattle, however, his ideology was that if a steer didn’t move when he told it to, whichever end the steer pointed at him would bleed.  He was fearless on heads and on heels. We backgrounded some commercial steers one year when we first got to Oregon. They were testy Angus X buggers, and one in particular, named Tony, drew the ire of 3 year old Hoke as well as 15 month old Cricket many times.  One of the other ones ended up with the nickname Nacho, because at one point, trying to push them through the chutes for routine vet care, that one turned and put his head down at Hoke for snapping a heel to get the balky steer moving.

The vet just cleaned and sprayed the missing chunk of ear with Blu Kote.

Two weeks before we left Southern California for Oregon, we trialed him at Murrieta.  He not only finished all three of his Started titles, he did it by winning or placing in each class.  He was Dale’s first ever trial dog, and it’s a good thing Dale is a natural at it, because Hoke was perhaps the hardest dog I’ve ever seen to train and trial.  He wasn’t bad at regular ranch chores, but since Ho was saner and more reliable on the cattle, Hoke mostly got to do pen work, because no one dared to disobey him in close quarters.

He had a reputation, somewhat deserved, as a flyby dog.  Once, a friend of Dale’s wandered by right after Hoke had been working hard on cattle with a trainer, and Hoke did a 3 acre sweep at full speed around the house and outbuildings, and as he passed behind Dale’s friend, took a strip of his blue jeans with him.  Didn’t touch the skin, but ruined a pair of Levi’s. Our good friend Don, who has one of Hoke’s daughters, used to egg him on, make him go faster and faster, just to laugh at the spectacle.

He wasn’t all that old when he blew his first ACL.  Then, a year later and semi retired, he slipped through the gate and rounded up the sheep in the snow, and tore the second one.  From that moment on, forced into full retirement, he voiced his displeasure every time someone went out to work the stock. Loudly.  And ran himself ragged unless he was put in the house, in a room, at the farthest point from the pasture, with a noisy radio on. In a crate, he’d hurt himself.

He was a lot of dog in a moderately small package.  Not as biddable as Ho Dog, he was never able to trial at the Open level, because we were never able to teach him to drive without a wreck.  He wanted stock to MOVE dammit, and once they got all crazy, he was in his element. He always did this just so he could put things back together again.  He didn’t chase to cause a riot, he chased because he wanted to gather and control. And he was damn good at that.

As he slipped into the silent and blurry world of the aged canine, he mellowed bit by bit.  He hadn’t barked in probably a year. He finally stopped trying to kill Rosie every time she got near him.  He ignored the Border Collie altogether, and she was very thankful for that. He stopped accepting his dorky daughter Sybil’s invitation to play; she was the only dog he ever really played with beside Ho, and that was when he was a young dog, and before the girl thing.  He and Cricket were like Ragnar and Lagetha (from the show ‘Vikings’) in how they ruled their domain. If you follow the show, you know that it’s now just an aged Lagetha; Ragnar is partying hard in Valhalla.

That morning, we didn’t wake up with the intention to let him go.  We have been watching, discussing, and measuring the quality of both his life and ours in these twilight years.

This morning, the scales tipped.  He could no longer get up on his own, and the results required a hose and the carpet shampooer.  His breathing was steadily growing worse; two nights ago, he woke us up with his bellowing respiration.  That morning, I accidentally bumped him with his hated nemesis, the vacuum cleaner, and he barely opened an eye.

For the record, my old vacuum has teeth marks on it.

It’s always a heart wrenching decision, to voluntarily end the life of a beloved pet.  You’re always questioning - am I jumping the gun? Is it too soon? Did I wait too long?  Did my pet suffer while I selfishly refused to let them go for my own comfort of having them around?

Will they tell me when they’re ready?  No, not usually. Sometimes, it works out that way.  But mostly, because I don’t anthropomorphize any of my animals, I know that short of obvious, protracted, vocalized pain and/or grievous, unrepairable injury, they cannot tell me they are ready to return to the stuff of stars, from whence we all came from.

But dammit, he just didn’t look like Hoke anymore.  The fire was dimming to the point of barely being there at all.  He lay awkwardly, back legs splayed up along both sides of his abdomen, and paid little attention to the world going on around him.  Watching him lay down was gut wrenching. The pain pills didn’t seem to be doing much for him anymore. Even a spunky, daredevil calf poking its nose thru the pasture gate didn’t draw his lion roar and charge.  The younger dogs would charge by him, knocking him down, and he’d just lay there, waiting for someone to help him up, instead of raining the wrath of Hoke down upon their snotty little heads.

We made the final, hard decision.  His long time friend and vet Ryan will, just as he did for Jazzee and Ho Dog all those years ago, lead him over The Bridge.  And it will be done.

As I was there at his arrival, I will be there at his passing.  And that is at it should be.
Get ‘em up, Hoke!