Hay is one of those things that really does make the world go 'round.  Without it, livestock in many areas of the world wouldn't survive the winter months and in some cases, the summer months as well.  It's a science, the growing, cutting and baling of hay. The types of grasses/legumes/grains planted are chosen for many reasons - protein content when growing and when dried, palatability to the particular type of livestock being fed, type of ground, amount of water and whether or not the pasture is irrigated are just some examples.  The type of livestock and in many cases, the breed must be taken into consideration.  Hay isn't merely grass that has been cut, dried and baled.  Horses have problems with fescue hay that was cut from non-endophyte free fescue.  Angus cattle have very high protein requirements, while our breed, the Murray Grey, can eat rocks and dirt and get fat.  Which means we have to keep our protein percentage in our hay lower or risk momma cows getting too fat before calving.  Sheep are picky, and only like the finer stemmed grasses such as fescue and bentgrass. And then there is the weed thing.  Today was a perfect day to go prerun the hay pasture, see if we've made any progress, growth-wise, and scout for weeds.  Our pastures have many types of weeds, most of which we barely take note of.  However, there are the big three that we scour the grounds for and ruthlessly dig and/or spray - blackberry, tansy ragwort and thistle, both bull and Canada.  Last year, my SoCal pal Shelly was up for Black Sheep Gathering among other things, and we spent a few days walking the 12 acres with shovels in hand, slaughtering tansy and thistle.  Today, Dale, Cricket and I drove the puttputt up and down doing the same.  Tansy is one of those 'seriously, this is a lethal weed?' type of weeds.  Yes, it is EXTREMELY toxic to most livestock.  The toxins accumulate in the liver and kidneys, causing failure, and it's not something that washes out of the system.  Once ingested, the toxins stay and once they reach a point, death occurs and not a good one.  Luckily, most livestock won't eat tansy except as a last resort.  It's a tough, determined weed with a mile-long taproot that means that when a non-irrigated, native bentgrass pasture like ours is dry and brown, the only green left is the tansy.  And if stock are desperate enough, they will eat it.  Some goat and sheep breeds can eat tansy without any ill effects, but it's deadly to cattle and horses.  And the thistle and blackberry have nasty thorns that you don't want to encounter when you reach for that flake of hay, half asleep on a cold winter's morning, because rest assured that the neighbour's haven't heard words like that since the last episode of 'Deadliest Catch' or 'Axmen'.

The good news is that from the bleak outlook just a few weeks ago, the hay pasture has made up some serious ground.  Between the fertilizer and the rain we've had lately, it's put on some seriously wicked growth.  Grass that a few weeks ago didn't even cover the sole of my shoe is now knee high.  I know Shelly was stoked, hoping that maybe this year would be the year she got to drive the tedder/rake, but I do think we'll be baling within the next two weeks.  It's already laying over in spots and the vetch and clover are just thick as a great milkshake, and with temps next week expected to possibly even hit the 80's, the timing will be about perfect.  Now, we just cross our fingers that we get a good yield and don't have to buy more this year again! 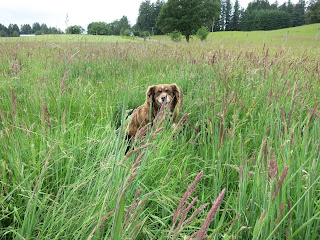 The Weather is What it Wants to Be

And there isn't a darn thing any of us can do to change it.  From record high temps and record dry spells to record lows and FINALLY some rain, we've run the gamut - several times.  No horrible twisters, snow storms on Memorial Day Weekend or 10" of rain in one day, that's for sure, but still pretty wacky

Posted by Morgan River.blogspot.com at 10:59 AM No comments:

On a warm morning, just walking anywhere near the dairy barn garage will stop you in your tracks as the pure, heady scent of roses envelopes you in breathable paradise


Posted by Morgan River.blogspot.com at 10:53 AM No comments:

Don and Donna were headed to Montana and couldn't take little Jan with them, so she came and spent a few days with sister Sybil and her uncle Dale, whom she totally adores.  He wasn't complaining 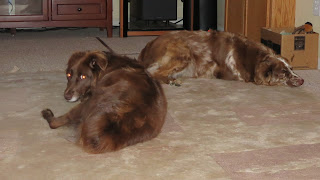 Posted by Morgan River.blogspot.com at 10:49 AM No comments:

It's been warm enough to just enhance the olfactory experience


Posted by Morgan River.blogspot.com at 3:30 PM No comments:

It's been....interesting.  Now officially the driest ever since recording began in the late 1800's, we are watching the lawns and pastures dry up fast.  No longer are people whispering the 'D' word - drought is now out in the open hereabouts.  And the heat hit hard the past two days.  The past few weeks have been rather stressful here, what with one thing after another going on, so today, forecast to be the hottest of the year, hands down, we decided to do what we always do to beat the heat - head for the coast.  Dale found a list of restaraunts we haven't tried around Newport, so we picked one and headed out.  The key here is that if it hits 70 by noon, you know it's gonna be hot.  It hit 70 by 9 this morning.  Never a good sign.  But, Newport had been in the 80's yesterday (and set a new record by a mile), and was forecast to be in the 60's today.  When we pulled up to park in Nye Beach, the car thermometer read an impossible 87 degrees! And it was warm indeed, even right on the water.  We were surprised to see that it actually ended up being a lot cooler back at the ranch - we hit a high of 82 at around 5 pm - than it was at the beach!  That so rarely happens, but it did today.

Things we never get to start doing before June - cleaning out the feederbunks (back in early April!!), harrowing the pastures, mowing the lawns - we not only have done but are almost done with.  Unheard of in early May to be getting the lawnmower ready to go back into storage until the late fall, or to be able to harrow the pastures and the area around the gates and south pasture feederbunks, let alone be thinking of getting the yearly rock allotment not only delivered but by the truckload AND poured out in the feederbunks.  The hay pasture is scaring me - still not enough growth, and while we usually cut and bale around July 4th, Ed was talking about end of May this year, IF it doesn't dry up before then.

But, everything is blooming, the calves are growing like crazy, the two boys have their own harems back for the breeding season, the skies have been the most incredible shades of blue and I'm betting the corn will be early this year, always a good thing.  There is always something to be excited about, even when things aren't looking so good in so many other ways