And They Just Keep Coming

It was a bit of a day yesterday.  Got Sybil down to see Dr. Ryan in Veneta for her OFA's and got back in time to see my oldest ewe Flossie's newborn son take his first shaky steps.  Got her up to the barn, did the usual stuff with young Winston, and later that night, Aprille had her second lambing, a set of twins.  And, it was not good.  For some reason, she's not letting her milk down and when I got to Rowdy the ram lamb, he was almost gone.  Sister Reba seemed to have gotten some, but for some reason Aprille rejected Rowdy.  Dale flipped Aprille over and I tried to get some milk from an obviously full udder, but not much was coming.  The semi-good news was that what I was able to get was pure milk, so someone got the critical colostrum, probably Reba.  I fixed Rowdy a bottle of powdered colostrum and managed to get a bit down him, something of a good sign, but his mouth was ice cold and he was clearly dehydrated and in distress.  About 30 minutes later, I went out expecting to be digging a small hole, but he was still with us and a bit more alert.  This time, he sucked a good 6 oz bottle of colostrum dry in record time and started yelling for mom.  Mom wasn't interested, however, so it looks like I've got my first bummer lamb.  At least he's good and solid with the bottle.

Two more left, Patty and my best ewe Twyla, and expect to find twins from Twyla in the next day or so, or if she waits, she's having quads at the very least! 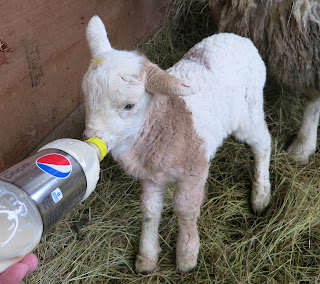 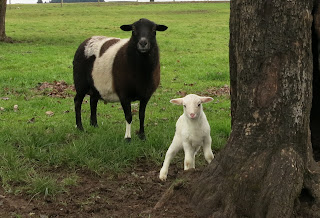 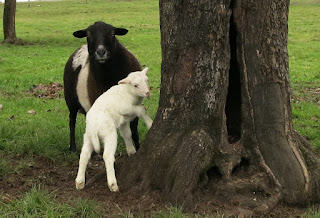 Posted by Morgan River.blogspot.com at 4:40 PM No comments: 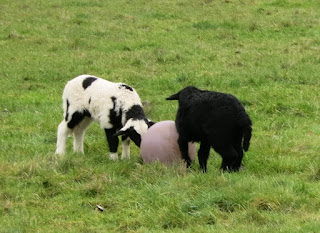 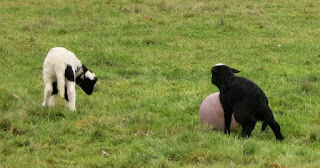 Posted by Morgan River.blogspot.com at 4:31 PM No comments:

New Chicks on the Block

The Gangsta Girls are getting up there, and egg production is starting to drop off, so it was time for some up and coming youngsters to join the flock.  My pal Mickey over at Dot Ranch in Scio is a breed conservationist for both poultry and sheep, and some of the endangered chickens she breeds are Java, Cuckoo Maran and crosses between the two, called Javarans.  Since I am getting two lovely Navajo-Churro ewe lambs from her in April, I figured that getting 4 new Javaran hens and 1 Maran-Americauna cross hen would work out beautifully, so yesterday afternoon I popped over and picked up the new chicks.  They are not allowed out with the big girls yet until they've settled in, but they have the chicken tractor inside the big, secure coop to roam around in and figure out where they are.

The barn cats better watch out - this gang of five won't take anything off of them! 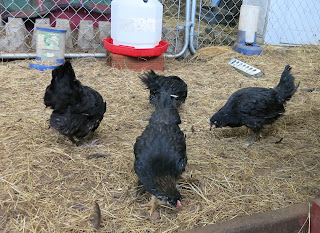 Posted by Morgan River.blogspot.com at 4:10 PM No comments:

After weeks of no sun and temps in the 20's all day and night, it was nice to actually see some blue sky and sunshine as well as temps that reached 50 (!) yesterday.  As my SoCal pal Shelly says, times like these the light is just magical.  No camera can truly capture it 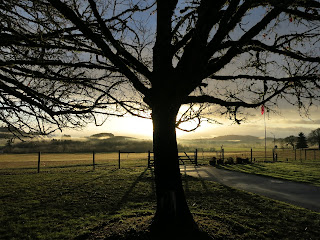 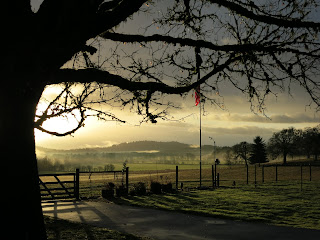 Scooby the Holstein steer, Zamora, Zinger and young Zenda, freshly weaned, take a break from head butting each other, farting, eating, telling blonde jokes and all those other things guys do when they get together and hang out.  You'll notice that petite Miss Zazu is not around; boys offend her greatly especially now that there are four of them to contend with, so she was snoozing up by the old red barn, well upwind of the four guys

Posted by Morgan River.blogspot.com at 4:00 PM No comments:

Yeah.  Me, who can't remember a darn thing and has to write EVERYTHING down on the calendar, somehow forgot to write down when I put Ricky Bobby back in with his girls last summer.  I was thinking it was late September, however on January 11th, I figured out it had to have been early August.  Gillian decided to go ahead and have a set of twins, Rango (black and white spotted ram) and Racie (black with TGH topknot ewe).  Gilly has always been a great mom, having twins her first time last year also.  It was a complete and utter surprise when it happened.  I had actually sold most of my sheep to Marcos up in Philomath, including Gillian, as I'm making a change over to fibre sheep and just bought two gorgeous Navajo-Churro ewe lambs from Mickey in Scio.  He was supposed to pick them up that day so we had put all of them in the working arena where we sort and load from.  Turned out he couldn't make it that day, but I didn't get them turned back out to the south pasture, which was pure, dumb luck.  We went out to run some errands and got back at feeding time.  Remember too, it was in the 20's during this time, even at midday.  I went out to feed and Dale said he'd go out to the south pasture to feed Pony and Pepper the goat and I told him to go ahead and cut the sheep out of the working arena into the south pasture and feed them too.  He and Ho Dog got into the puttputt and headed around the barn to the south pasture and I started to go feed the cows.  Then I heard the puttputt coming back towards the barn and thought no way, he couldn't possibly have gone out and done all that already, so I went out of the barn (leaving a bunch of unhappy, hungry cows mooing indignently at me) to see what was going on.  He was yelling 'TWINS', but I had checked on Twyla, who I thought was awful close for not being technically due until the end of February and she was fine, but just behind her, Gillian was in the working arena with her newborn twins!  I didn't look past her or I would have seen them.  We got the rest of the sheep out into the south pasture, which will end up being a really dumb move, but more on that later, and got Gillian and her babies out into the maternity pasture, where I tucked a lamb under each arm and headed for the barn with one very unhappy momma ewe running circles around me.  Got them settled in the barn for the night, and that's when I found the iodine frozen solid in the bottle.  Dale took the bottle up to the shop to thaw it in front of the heater, and while he was doing that, it dawned on me - if Gilly lambed, that meant that the other two older ewes that I just put back out into the south pasture couldn't be far behind.  The yearling ewes were okay as I know when I put them back in with RB, but I had to get those other two back into the maternity pasture ASAP.  Back out to the south pasture and after a bit of a rodeo, we managed to get those two ewes into the maternity pasture and all was well.  They joined Twyla and her sister Flossie, whom I am keeping, and we are awaiting the new arrivals any time now.

Rango will be staying here.  I like his mom a lot and he's a really nice looking and nicely built ram, just what I've been waiting for.  Racie will go home with momma Gillian to Marcos' ranch and join her other siblings in her new herd in April after we wean.

Now that the weather has warmed up, I told the rest of the puffy ewes that they can now commence lambing.  Not a fan of lambing in icy, foggy weather, even in a barn.  And tired of carrying the iodine bottle out with me every morning too!


Posted by Morgan River.blogspot.com at 11:42 AM No comments:

It's been quite awhile since I've posted something to the phlog.  First, there was the camera issue (resolved with a brand new Canon S110), then the phlog wouldn't let me post pictures for a long time, then there was that whole icy fog thing for the past 15 days.  It all started on the new year, where we started the day at 29 degrees.  I was feeling kinda sorry for myself, then I saw that my mom and little bro Jim back in Fond du Lac Wisconsin started the new year at -12, as in 12 degrees below zero, and then I didn't feel so bad.  This inversion we've had is usually something we see in November when we do see it; and it usually doesn't last this long.  It's been interesting.  I have to keep a hose in the heated greenhouse so that I can fill the stock tanks after I break the ice on them, then drag the hose back into the greenhouse.  It hasn't been even 30 for so long that the two times it was (30 and 31 degrees), it was only for a few minutes then right back into the 20's again.  But, it's finally breaking up today, with a little rain and snow mix, and the clouds now have actual texture to them.

But, it's also been a photographer's paradise with all the possibilities surrounding us in the form of icy objects.  Having the new camera just in time for everything to start thawing was a little sad, but the old Nikon did get a few good shots (the first four).

So, enjoy the show! 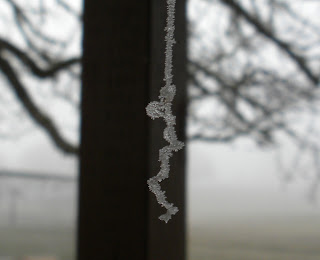 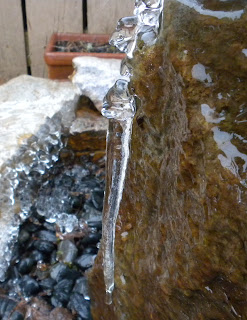 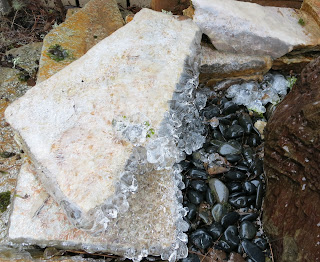 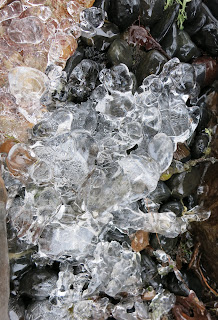 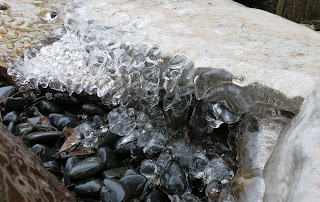 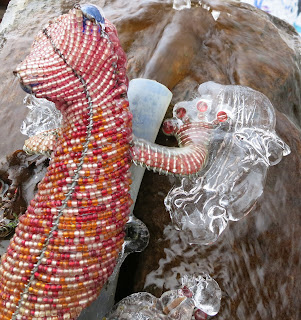 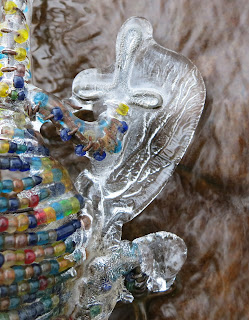 Today, Dale and I took a leisurely trip out to Stayton to see Chadlee, of www.greenhousesbychad.com and see our new greenhouse that was waiting for us.  To say it is awesome is an understatement!  This guy can build some greenhouse.  It'll be here on Thursday and I can hardly wait!  Dale and I are getting the site readied for it with a new foundation addition to accomodate the larger size of the house 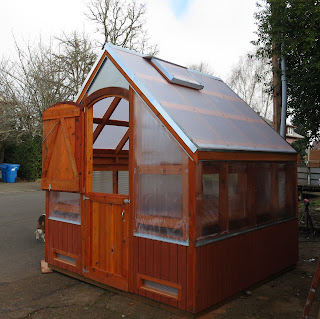 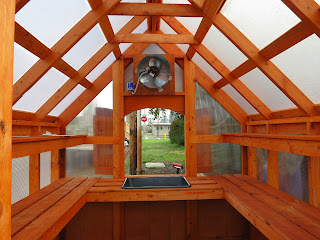 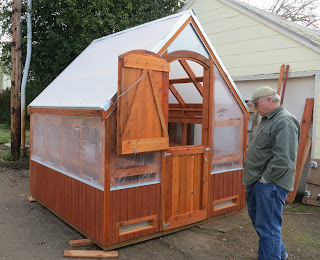 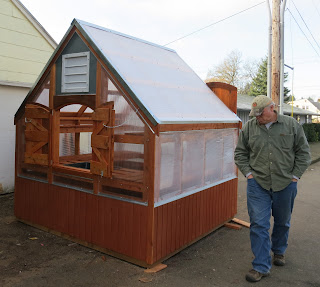 Posted by Morgan River.blogspot.com at 7:39 PM No comments: