Hey guys! Co-blogger Anna here with a quick blog of some 6 weeks pics I took this wednesday. It's been interesting watching the development of these pups from nearly three weeks, to four weeks to now six weeks old, from size to personality. 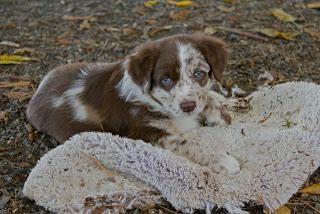 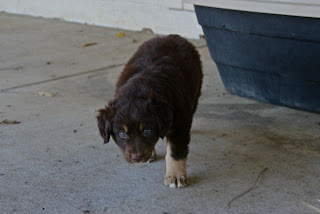 Posted by Morgan River.blogspot.com at 7:54 PM No comments: 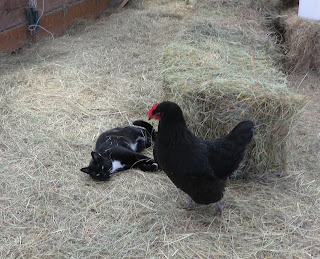 It was a big day for the 6 week old horde.  Baths first, then a 18 mile ride in Really Big Red (Dale had the Jellybean on another appointment), then weird drops in their eyes, a dark room and a scary person with a funny hat thingy and flashing lights, followed by the ride back home.  The baths went very well, and the ride was a dream with not a single peep out of anyone.  Doc Maxwell at Eastgate just gushed over how well behaved they all were, quiet and cooperative.  She even posted some pix of her faves on her Facebook page!  They all slept on the way home and that was that.  Sougan ended up as I suspected with iris colobomas, a minor cosmetic flaw that doesn't affect her vision except in very bright light, where she might squint a bit.  Otherwise, full marks to everyone!

And it sure was nice to have clean, fluffy pups, at least for a little while.... 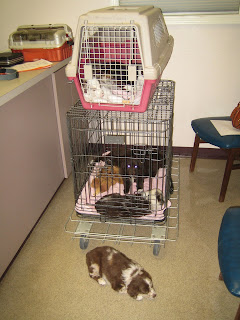 Out Into The Big Yard

It was getting harder to clean the puppy pen with the residents inside, so this afternoon, Dale suggested it was time to set loose the hounds, release the inmates.  I had Cricket in Kathy and Dave's shirt to smell it up, and I probably should have pulled it off of her before I released the horde, but at least now it REALLY smells.

And the pictures - I'll apologize in advance.  It's happened to me before and it happened again that I somehow moved the dial selector off of 'auto' and onto whatever isn't auto.  So there are some fairly dark pictures; I dumped the worst of them and kept some that were just too cute to give up on, so you may have to squint a bit. 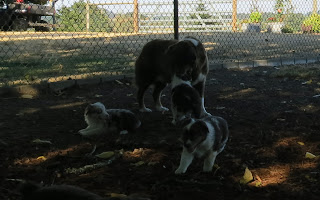 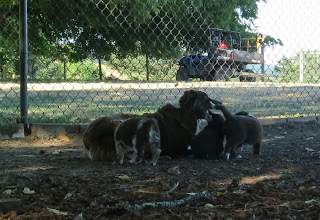 We try to expose the pups to a lot of things while they are here, and being fortunate enough to live on a working cattle ranch, we are rich in stuff to expose them to.  Yesterday and today, it was riding the fencelines in the putt-putt.  On Friday, Tim, his son Jack, Ho Dog, me and Sougan did the riding.  Today, Dale, Ho Dog, me, Sawyer and Sweep did.  They will also go nose-to-nose with a friendly cow in the next few days and next week, we wil show them ducks in the round pen.  And Monday is a big day for the Horde - their first long car ride, all the way to Corvallis for their CERF exam with Doc Maxwell.  And then, the following weekend, all but one are off to their new homes!  Time really just flies along sometimes.

Posted by Morgan River.blogspot.com at 3:48 PM No comments:

Tim and Jack Visit The Horde

Our longtime friend Tim and his son Jack came to visit from Las Vegas.  Tim has had three of our dogs in the past - a Morgan daughter, a Cody X Ysabel son and Ho Dog's brother Jake, who sadly crossed The Bridge much too young earlier this year.  So it was just the right timing for Tim to subject himself to yet another puppy raising with one of the Horde.  Tim has a really special bond with dogs, and the pups were no exception.

Posted by Morgan River.blogspot.com at 3:41 PM No comments:


Posted by Morgan River.blogspot.com at 3:35 PM No comments:

Tanya, owned by Taz (Andy) from the 2010 litter, dropped by to see the pups with her son Duncan and his friend.  Duncan and Reese thoughtfully wore high, heavy rubber chore boots.  I'm thinking this is the perfect footwear in piranha infested puppy pens.

Posted by Morgan River.blogspot.com at 3:34 PM No comments:

It was time for their very first car ride (and crate time), so it being a perfect day for it, not too hot, I loaded them up in the Jellybean two at a time, loaded up Ho Dog and told Cricket to get her butt in there as well.  We did a relatively short loop of about 9 miles, and for the first two, we stopped in to see my buddy Jan at the Resale Shop in Monroe for a moment.  Everyone else just got a ride without any perks other than strange and exciting smells (a field fire added some spicy smokiness).  It was funny that the two I thought would be the best turned out to be the worst, and the last group of three were the best by a mile, with the two in the middle starting out a bit vocal but then settling down quickly.  We will continue to take short trips in the crate for the rest of the time they are here, using both the truck and the Jellybean, and even handheld in the putt-putt one at a time.  Cricket and I moved the sheep to the working arena and Hoke will put the ducks in the round pen for the puppies to work probably next week.

I have been shooting the bull barrel .22 Ruger pistol near the puppy pen for two days now, will continue with that.  They don't take any notice of the shooting.  I also plan to pull the tractor up near the pen and let it idle a bit then run it back and forth some.  And, the cows - yes, they have started to notice the cows!  Of course, doesn't help when sister Sybil and daddy Hoke go charging the fence when the cows stray too close.

Hard to believe next Monday they get their CERF exam and then the next weekend they are almost all leaving!  It's hard for Dale to let go of them.  He was talking to Brandi, who is getting one, and telling her that if it were up to him he'd keep them all.  He tends to forget that whole 'teenage' thing they go thru and how Sybil barely survived it when she went thru it!  Times 7?

And the slideshow feature is working again!  Click on the first shot to start.