Ah, to be in labour, out in public, with zero privacy. I'm sure there are women out there who feel the same way as Romance here earlier this afternoon, in early Stage I labour. Notice her puffy cheering section, big black lump Ruffie and bigger dun lump Moonpie. They're just so supportive, aren't they? Especially since it's their turn soon - REAL soon. 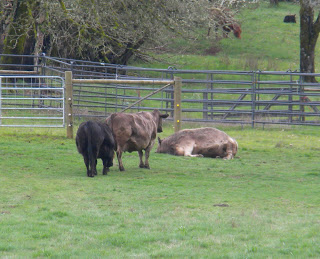 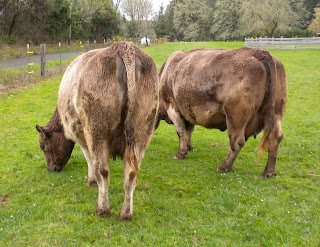 Two puffy cows, Romance and Moonpie, chowin' down between contractions. Romance has been workin' on it all day, a little bit here, a little tail switching there, belly kicks whenever the urge strikes. And now that it's full on dark, she'll probably feel like it's maybe time to be gettin' on with the job. Of course, I fully expect she'll wait until 2 am to do so, knowing her. Needless to say, I won't be getting much sleep the next few days. And tomorrow's supposed to be super nice, our last nice day for a looooong time, so it'd be great if the other three would just pop tomorrow, say around 10ish in the morning, after I've had my coffee and all that....such wishful thinking on my part.

Ewe Had Me At Go Bye

It wasn't the prettiest job ever, but it did get done, no one and no critter got hurt, and it pointed out a weakness in our temporary fencing that Dale's headed out to get something to rectify it. But all in all, it certainly could have been worse. If it had, my local readers probably would have seen it on the news tonite, and it might have made the front page of the Tri County News. Or, maybe not. Hoke and Dale moved the two North Country Cheviot girls over to the north pasture from the maternity pasture to eat down the grass in the strip that the new trees are in. We figured to use them instead of having to run the mower down there, which is kinda hard to do, but it can be done. However. Three strands of very hard to see hotwire didn't faze them at all. Once Dale and Hoke got 'em in there, they lasted about a minute 45 before they tore down the bottom wire and headed out into the pasture. The move involved sorting the two girls out from the rest of the ewes and their lambs (don't ask; it did finally get done, but it just wasn't real pretty - Hoke is an old school "no sheep left behind" kinda guy), taking them out thru the gate, onto the lawn, across the yard, thru the gate into the north pasture, and then into the strip. Minus a slight excursion wherein the ewes blasted over to go see the cows (and hopefully escape Hoke's pressure), Dale got everyone back on track and into the strip. Had the operation not gone quite as well as it did, we could have had sheep headed for the coast or Corvallis, but we didn't, thankfully. 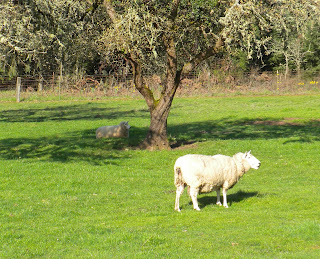 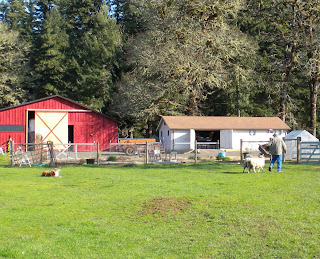 At the gate after a little workout 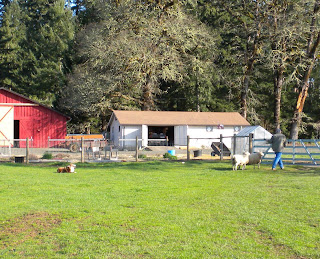 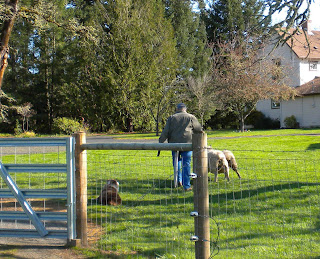 This could be trouble; their noses are pointed towards Dawson Road and freedom 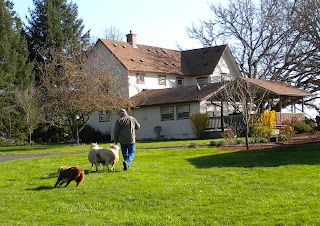 Hoke goes to cover that side and prevent any escape 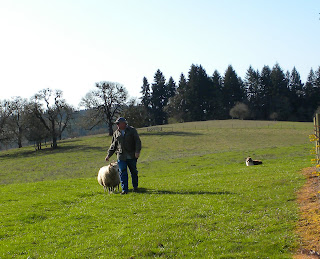 No, they weren't supposed to go where they just came from, but Hoke did fix it and get them pointed in the right direction 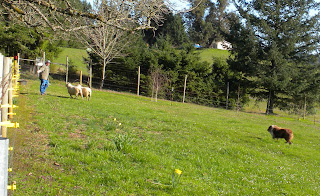 No, I wasn't drunk when I took this shot, just leaning over the gate. Dale and Hoke line them up with the gate to the strip

Posted by Morgan River.blogspot.com at 10:56 AM No comments:

Hoke Gets the Job Done

Hoke actually got to go first on this fine afternoon, as it was his job to gather the sheep out of the south pasture, separate out Dingbat the Wonder Horse and His Minions, Salty and Pepperpot the goats, and then put the sheep into the working arena for both his and Gem's pleasure. He of course had to have a bit of fun with it, as usual for him, but he did get the job one. 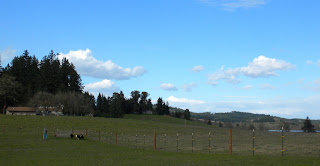 I know, such horrible working conditions we have out here - crowded, not in the least bit scenic, noisy - it's a wonder anyone can work in these conditions

Hoke at the "gate" 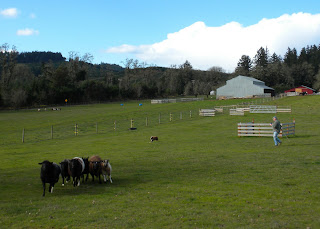 He's finally starting to get the concept of driving 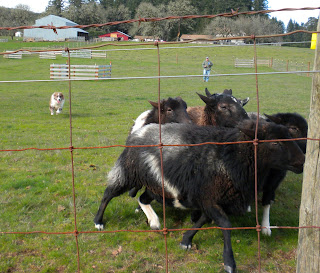 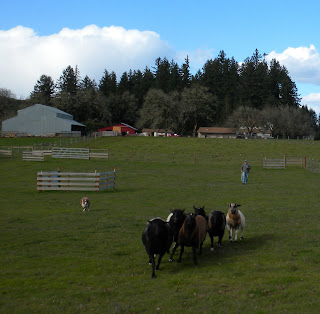 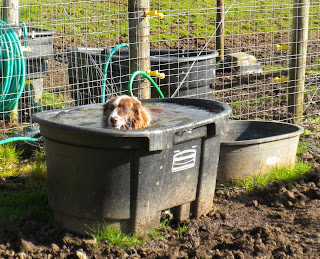 Posted by Morgan River.blogspot.com at 7:20 PM No comments:

See Gem the BC Work 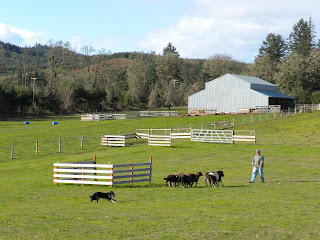 It was just too perfect a day the other day to pass up the opportunity to work Gem, the BC puppy, so Dale and her went out to play with the sheep. Here, she's doing a nice job covering, if a bit on the snappy side, speed-wise. 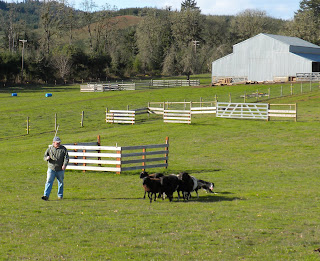 She covers her side, something she's not quite inclined to do as much as she should yet, but she'll get there 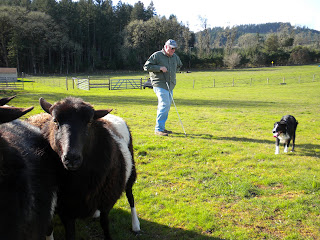 Ah, her fave thing in all the world - sheep in the corner, in total balance to her. This tends to be something she likes to do a little too much, but she's working on it 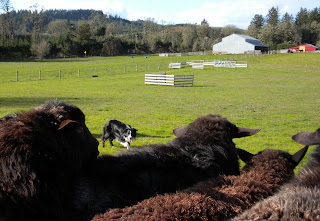 If you're a sheep, this is a view that strikes fear into your heart - a BC on the job

Posted by Morgan River.blogspot.com at 7:10 PM No comments: