20 years ago today, in the small east San Diego county town of Lakeside, a blue merle Australian Shepherd bitch puppy was born. Her name was Morgan, with Morning Delite of Riverview being her registered name at that moment in time. By the end of her time here, it became U-CD Morning Delite of Riverview ASCA/AKC CDX STDsd, RV-E JV-O NA NAJ CGC DNA-CP. There is just so much I could say about her; her storied stint as one of the founding dogs of the San Diego Children's Hospital Therapy Dog Programme; her starring roles in an episode of 'Renegade' and a 'Shamu TV' episode for SeaWorld; her uncanny intelligence; her ability to learn the entire Utility obedience routine in less than a day, then change it up in trials to earn her the title "Freestyle Utility Dog"; and so on. But, sometimes, simple is the best way to honour someone very special. She was, without a doubt, the best dog we ever had the honour to share our lives with. She'll have been gone over The Bridge 7 years this June; hard to believe. Sometimes, it seems like just yesterday; other times, it seems to have been decades. But one thing is for sure - there'll never be another Morgan. Her line continues on to this day, and she'd be proud of her grandkids, great-grandkids, and great-great grandkids (and soon her great-great-great grandkids will be making their debut). So, enjoy a small fraction of the pictures of our grand old girl, and send a good thought her way on her birthday today. 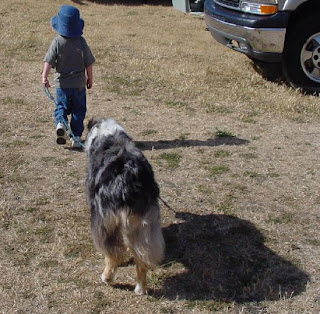 With my nephew, Spencer, in Cayucos, California. She will cross The Bridge in 8 days 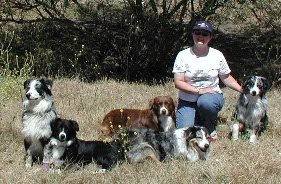 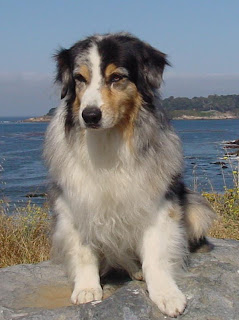 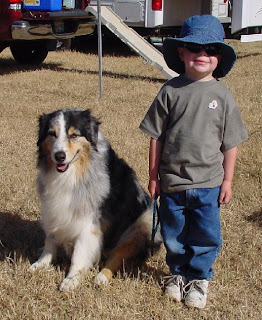 With Spencer in Cayucos. We started going to Cayucos in 1992 and until we moved to Oregon in 2006, didn't miss a year. This year, 2003, sadly, would be her final visit. She has a memorial fencepost there now 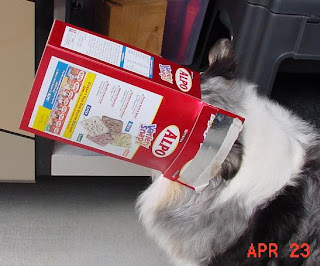 We call this one the "Bone Box Bandit". She did love to eat! 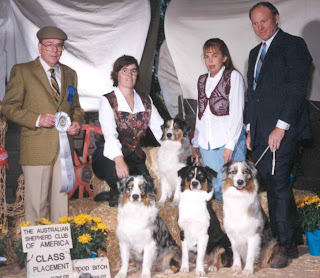 The 1994 Nationals, where she took a 4th in Brood Bitch, with son Pup, daughter Jazzee, and son Lyle 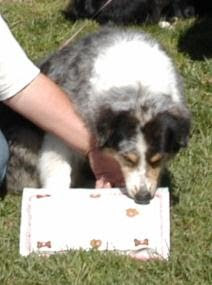 Her 13th birthday party. She's not willing to wait nor share the cake with anyone 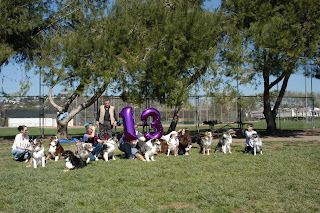 We tried hard for a group shot on her 13th, but it wasn't gonna happen, not with almost 30 Aussies of varying ages having much too good a time to sit still long enough 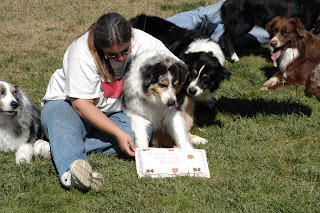 Daughter Jazzee wants a closer look. The red dog is Jazzee's grandson Ho Dog, and to my right is Morgan's son Lyle 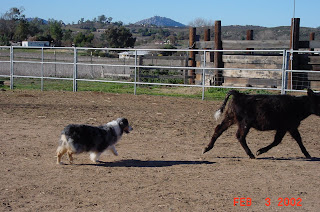 Working cattle at 12. She never lost her drive nor her love for working 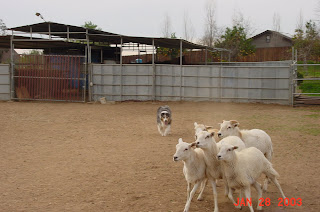 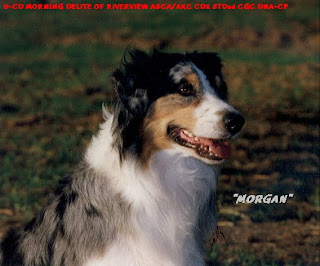 I think she was about 3 in this shot 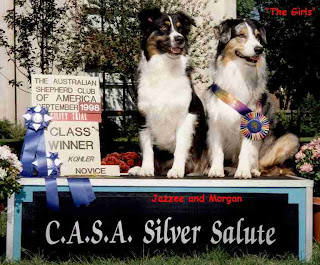 With daughter Jazzee at the 1998 Nationals, both winning their respective agility classes 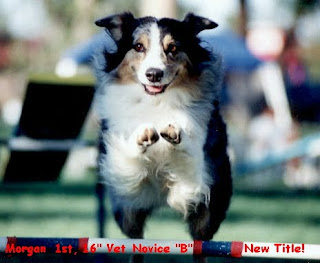 She might have been around 8 or 9 here. She retired from agility at 11 because she was going deaf 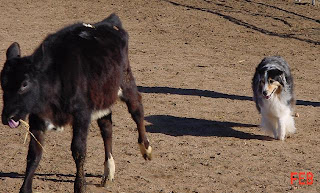 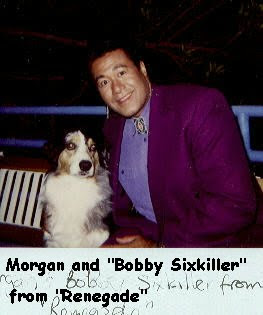 Her starring role in 'Renegade - Top Ten with a Bullet' and co-star Bobby Sixkiller, otherwise known as Richard Branscome (I think). He also has (had) an Aussie 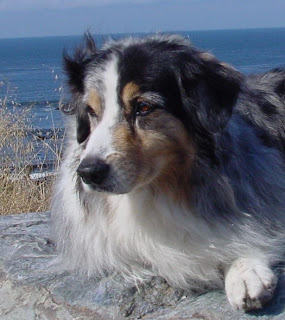 She was one of the best there ever was. Happy birthday, Wagglebutt!
Posted by Morgan River.blogspot.com at 8:00 PM No comments:

Big Red - Truck of All Trades 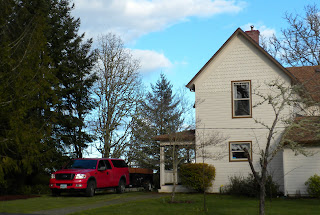 Big Red. Always gets the job done. Some of the stuff we used him for when we first moved here, before we got Big Orange (the big Kubota 5030 tractor) would make ya cringe, but he never once complained. Oh sure, he's got his own garage, shares it with the puttputt (Polaris Ranger UTV), and Rollover the barn cat likes to sleep on top of him, plus it seems he's always dirty, but he's happy - he's doing a what a truck is born to do, work. He's almost always attached to the dump trailer, or 6000# of fertilizer trailer from Wilbur-Ellis (next week), or the flatbed, or the 14' stocktrailer (with and without stock), and even occasionally the little stakebed trailer; it's rare he's runnin' solo unless we're headed to the coast with all the dogs. But now, Jellybean has taken over that task for the most part, so about the only "fun" thing he gets to do these days, and especially this time of year, is hit the garden shows and sales and get loaded up with pots and plants (notice I said pots AND plants, just so you don't read it wrong and get some funny ideas). Hard to believe he's 6 years old now, sneaking up on that 100K mark. I still like that sound than only Ford trucks make when they start up. I can tell the sound of one of those big ol' 5.4 litre V-8's anywhere. It's a sound I never tire of hearing.
*******************************************************
Rock on, Big Red!
Posted by Morgan River.blogspot.com at 9:18 PM No comments:

Gizmo Among the Daffodils Redux 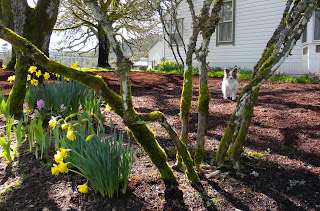 An arty shot of Gizmo, inspecting the new mulch, looking thru one of the ancient lilacs. He approved, by the way. Don't forget to click the pix

Posted by Morgan River.blogspot.com at 8:53 PM No comments: 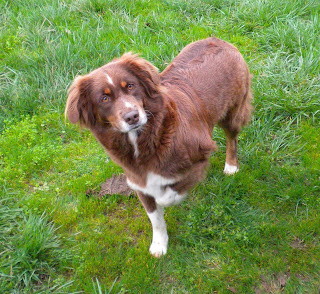 Too funny - she held this pose for quite some time. Rollover the barn cat was sitting up in the puttputt, just egging her on. She's not much of a cat chaser, and he's not much of a run-from-the-dogs cat, but this was just too good a shot to pass up. You gotta love the intensity here.

Posted by Morgan River.blogspot.com at 9:28 AM No comments:

Of Cows, Chickens and Ho Dog

On their second day in the world, the lambs learned of a few things. First thing - even young cows have REALLY big heads, especially when the head comes thru the door unexpectedly. Vega the young bull calf makes his entrance, mostly to check out the flooring options. 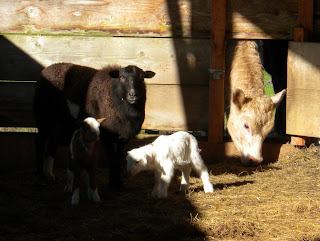 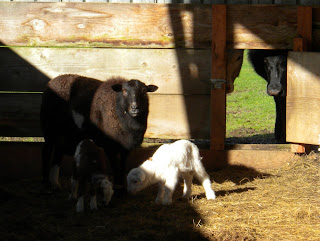 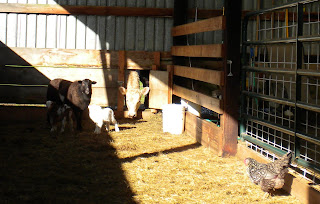 I think this is Violet saying hi. One of the Gangsta Girls keeps a wary eye on the youngsters as well, just in case she needs to remind them exactly who is in charge here 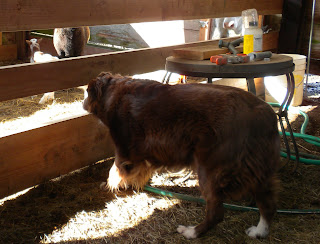 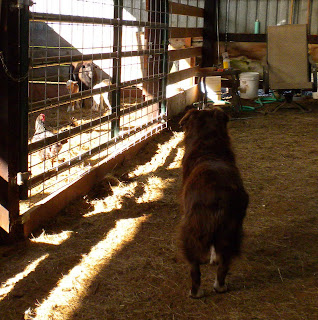 Ho keeps an eye on them, just in case they think about doing something that he'll have to take care of. Twyla was not real happy about him being in the barn, needless to say

Posted by Morgan River.blogspot.com at 7:12 PM No comments: