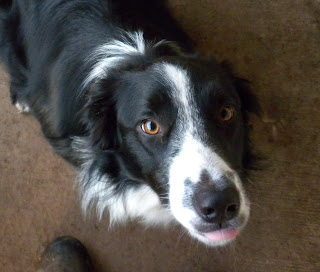 Gem the Border Collie puppy, shows me what she thinks of getting her picture taken. 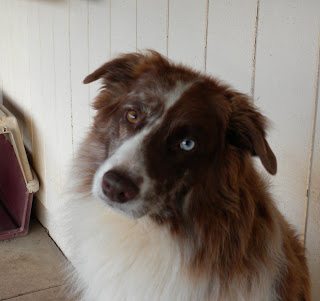 And Hoke, just looking as dignified as he gets. Such a serious guy, that Hoke.

Posted by Morgan River.blogspot.com at 2:45 PM No comments:

He Was a Good Dog 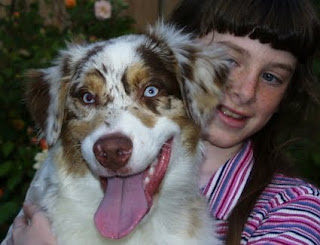 Sometimes, life's just not fair. One thing that isn't fair is that our dogs don't live as long as we do. All of us who have known the unconditional love and loyalty of a good dog have known the pain of losing that dog at some point. On Saturday, with his first and only family surrounding and holding him, Merlin's long-time vet Dr. Paul Fenner helped him cross The Bridge, set him free. He joins many siblings and of course, his mom Jazzee, dad Jack and grandma Morgan among the crowd gathered there waiting for him. The picture above, from a few years ago, of Merlin and his goddess Katie, pretty much says it all. He'd do anything for Katie, and he taught Katie much about a dog's love along the way. Katie's all grown up now, a college grad working all the way across the country from her home in the San Diego area, but she always shared a special connection with her boy. Here's a link to a video from 1997 that has to be the most heartwarming thing you'll ever see in a few seconds of grainy images. It's a little hard to hear what is said, but Katie's mom is asking which puppy Katie is holding, and in the background, Katie's pal Steph says it all - "Who else would she be holding?" http://www.youtube.com/watch?v=54m2jaxE6Y0 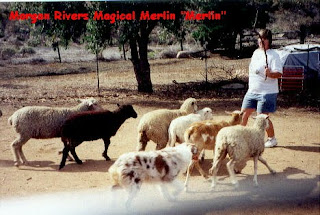 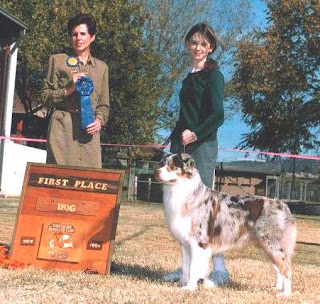 He always did well with Katie at the helm - always 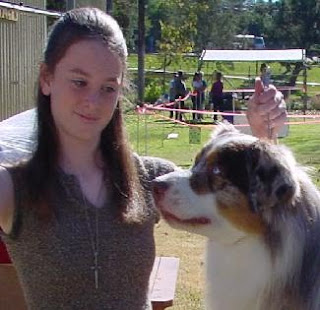 You can see it in his eyes - his goddess, and he adores her

The half-siblings Merlin and Jarrah, with grandma Morgan, earning their AKC Herding Instinct Certificates, quite easily I might add 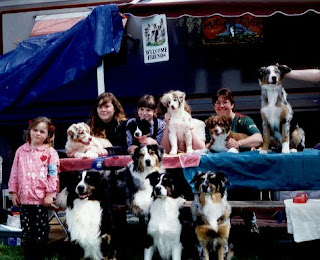 Boy does this one bring back memories. This must have been very early 1998, an ASCA show. Merlin is with Katie's big sister Betsy on the far left side of the table. His sister Nykee (black and white) is next to him, and his steal-the-show (and any food) sister Catera is the middle pup sitting up looking cute. Next to her is brother Sherman with owner Laura, and the bigger blue merle pup at the right end of the table is Riggs. Sitting in the middle of the bench is the matriarch of the entire clan, Morgan. Below her on the ground is her son Cody and daughter Jazzee, and Jazzee's daughter Ysabel. Rigg's is Ysabel's son, and the rest of the pups are Jazzee's by Jack. The little girl in the red checks standing next to Cody is Laura's daughter (who is now in college I believe).

Rest in peace, Merlie Moo. Say hi to everyone for us, and continue to watch over your goddess, won't you?

Posted by Morgan River.blogspot.com at 7:31 PM No comments:

He's a swingin' dude, y'know? Like, even though he's, um, not all there shall we say, he does love the ladies. Or, for that matter, any dog. Just like grandma Jazzee, every dog's best friend. The old man, Ho Dog, soaks up some rare late afternoon sunshine, and displays some of his many moods. Here is Debonair Ho Dog, or "Mr. GQ" as we call this pose. 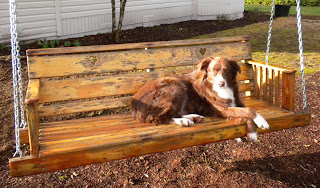 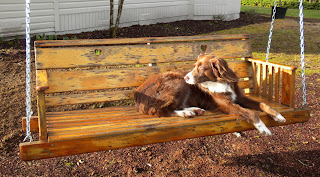 This is "hey, does dad have some food in his hands?!?" Ho Dog. Love the placement of the heart cutout, don't you? Pure chance, that 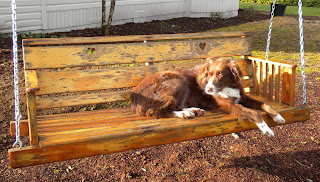 This would be "aw, he doesn't have any food in his hands" Ho Dog Posted by Morgan River.blogspot.com at 11:43 PM No comments: