Link to the Old Blog

As per a lot of requests, here is the link to the old blog, where you can see a whole lotta stuff that happened before this blog was started. Lots of pix, but for some reason, some of them don't show up. I'm hoping this link works too, as I haven't tried it yet myself.

A "Crick and Bull" Short Story 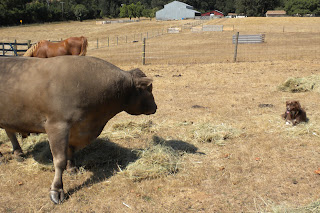 What a fine, late summer day it was today! After another two days of record breaking heat - thankfully, we don't get as hot as Eugene or Corvallis, we never saw more than 98, but baby that was ENOUGH - we're sitting at 75 at 4 pm, meaning it might get to 79 by 6 pm, but maybe not. Anyway it goes, it's a big relief. And, that meant I was finally able to get out and get some updated shots of the '09 calf crop for Bonnie. Plus, I needed to get rid of some of last year's hay as well as some of this year's "oops" bales (small, lopsided, single string, et al) to make room for a couple of tons of alfalfa for the calfs this winter. Cricket and I loaded up the hay (well, okay, she's not THAT talented, I actually hauled it out to the puttputt) and off we went to feed a little.
I snapped a ton of pix with the new S630 Nikon Coolpix while Cricket was sitting in the puttputt. Or, so I thought anyway. I was lining up pix of the calves when I saw Roar start shaking his head and backing up. That's what he usually does when Dingbat the Wonder Horse is messing with him, but Pony was busy eating hay a ways off. So I walked around the back of the puttputt to see all 40# (soaking wet) of Cricket eyeing 2200# of bull away from HER puttputt! When she had him far enough away, she carefully laid down, still eyeing him, as if daring him to come back towards it. He wasn't going to test THOSE waters!
And that is what power is, in stockdog parlance.
Posted by Morgan River.blogspot.com at 4:07 PM 1 comment: